Alex Jones addresses a pro-Trump crowd on Jan. 6, the day of the U.S. Capitol riot. Jones is widely known for his support of baseless and often bigoted conspiracy theories, and he has been banned from many tech platforms, though not Amazon. 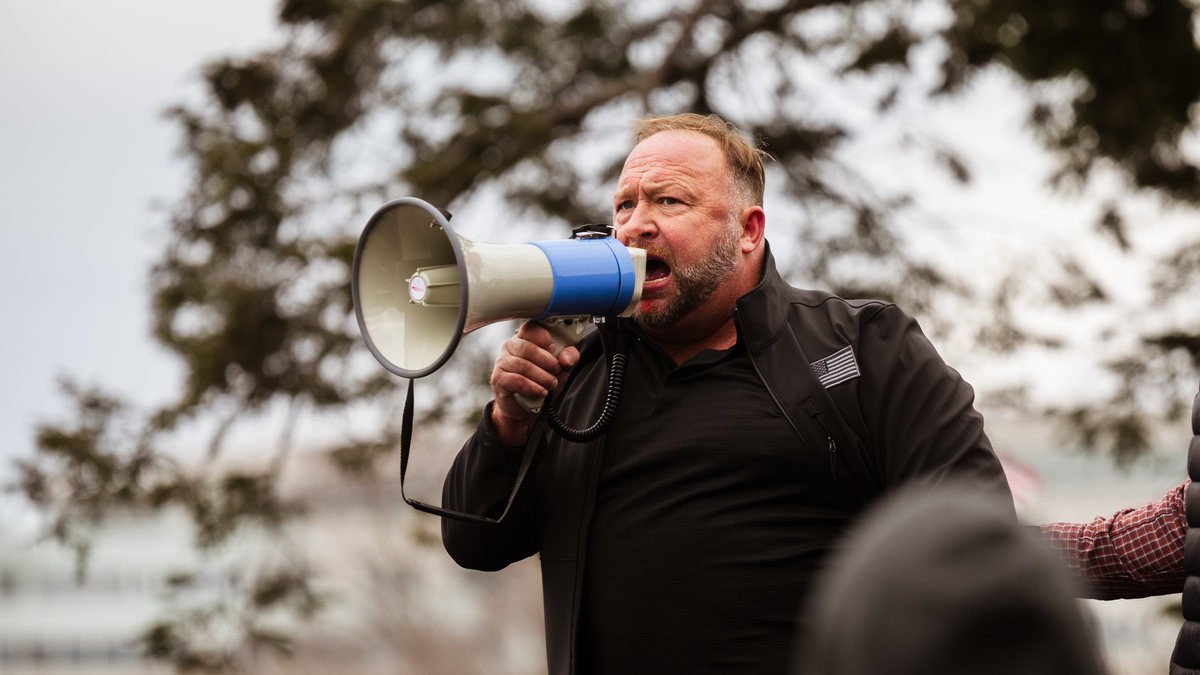 Alex Jones addresses a pro-Trump crowd on Jan. 6, the day of the U.S. Capitol riot. Jones is widely known for his support of baseless and often bigoted conspiracy theories, and he has been banned from many tech platforms, though not Amazon.

The far-right conspiracy theorist Alex Jones has been banned from Facebook, Apple, YouTube, Instagram, Pinterest, Twitter, Spotify and even PayPal for violating those sites’ policies against hate speech. But Jones continues to have a platform to sell expensive dietary supplements through one of the world’s biggest online retailers: Amazon.

Just as Amazon provides massive third-party sellers — such as Starbucks, Coca-Cola or Apple — with their own online storefronts, Jones’ Infowars Store has a home on the site, too. There, he sells products such as “Super Male Vitality” drops, “Lung Cleanse Plus Spray” and “Prostaguard” pills.

“Thank you for supporting the Infowar!” the storefront states above its listings, suggesting that Jones is not just selling supplements but providing a path for consumers to fund his extremist causes. Meanwhile, Amazon provides support to Jones and gets a percentage of all the sales — called a “referral fee” — as it does with all third-party sellers. For supplements priced over $10, the referral fee is 15%.

Neither Amazon nor Jones responded to NPR’s requests for comment.

Jones’ Infowars Life brand sells dietary supplements through Amazon as a third-party seller. Amazon earns a “referral fee” for sales made through its site.


One of the only other major sites to provide Jones with a platform is eBay. “Your purchase directly supports Alex Jones and his Infowars operations,” the eBay storefront states above a similar group of Infowars dietary supplements. However, eBay is a small fraction of the size of Amazon, and brought in a little more than $10 billion in revenue in 2020, compared with Amazon’s $386 billion. NPR also contacted eBay for comment but did not receive a response.

Jones is known, in the words of the Anti-Defamation League, for “spreading violent, bigoted conspiracy theories,” which is what led several tech platforms to ban him years ago. Among the theories he pushed: the baseless idea that the Sandy Hook Elementary School shooting in 2012, which killed 26 people, including 20 young children, was a “hoax.” Afterward, families of the slain children said they experienced waves of harassment that have lasted for years. Jones later stated in a deposition that he was experiencing “like a form of psychosis” at the time and said that “my opinions have been wrong, but they were never wrong consciously to hurt people.”

Jones has also been a supporter of former President Donald Trump and embraced the false conspiracy theory that the election was “stolen.” Jones marched in Washington, D.C., on Jan. 6, though he did not breach the U.S. Capitol building. According to The Wall Street Journal, Jones also helped coordinate a $300,000 donation to support the rally at the Ellipse, where Trump spoke before the riot. The Journal reported that he also gave nearly $100,000 of his own money to a pro-Trump event the night before, where he also spoke. Jones has also repeatedly featured the leader of the anti-government militia the Oath Keepers on Infowars. Other members of the Oath Keepers are now facing conspiracy charges related to the Capitol riot.

Since Jones’ businesses are private, exact figures about the amount of revenue he generates, including through Amazon, are unknown. But court records and news reports suggest that much of Jones’ fortune, which he can use to fund his far-right causes such as that rally, comes from marketing dietary supplements. In addition to Amazon, he also sells supplements directly through his own site.

In 2014, his businesses brought in $20 million, according to court testimony cited by The New York Times. The Times also viewed some of his financial documents and reported that most of that money came from supplements that year. The German magazine Der Spiegel profiled Jones in 2017 and reported that about two-thirds of his income came from product sales, including supplements. A filmmaker who worked with Jones in 2019 told the Southern Poverty Law Center that Jones bragged about making $60 million in a year, though that figure is unverified.

“He is making, at a minimum, tens of millions of dollars,” said the SPLC’s Michael Edison Hayden, who has looked into Jones’ finances. “As far as I can tell, the dietary supplements are the absolute bread and butter, the foundation of his entire business at this point.”

On his shows, Jones pitches the supplements as not just a health item, but a contribution to his political movement. “There’s a lot of people that need my help, and it’s gonna take money to do it,” Jones said recently. “Please buy products from us whenever you can.” He then pivoted to hawking his “Alpha Power” — recently sold on Amazon and available with Prime shipping in some areas — which he said, “I can’t even tell you, it makes me so aggressive and virile, it’s ridiculous.” 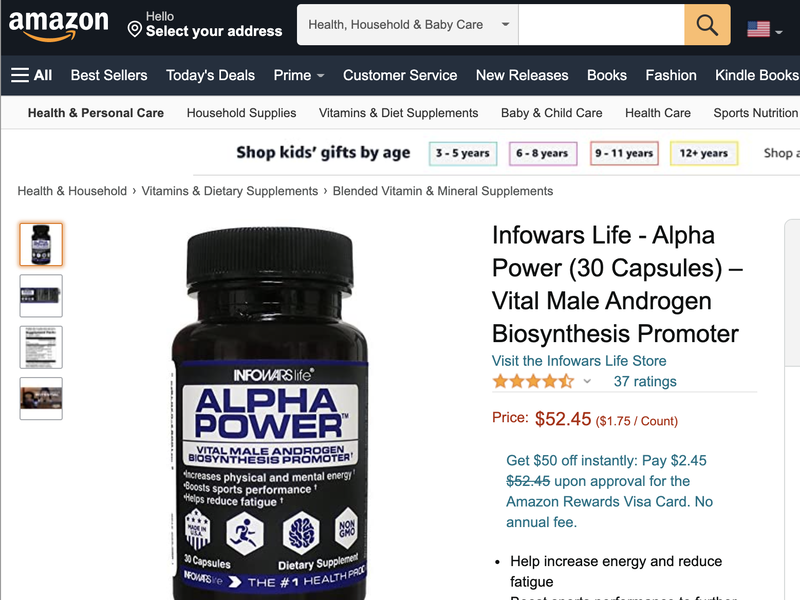 Through Amazon, Infowars sells a variety of dietary supplements such as “Alpha Power.” The supplement industry is largely unregulated, though Jones received scrutiny from government agencies in 2020 for claims he made about his supplements’ supposed ability to treat COVID-19. 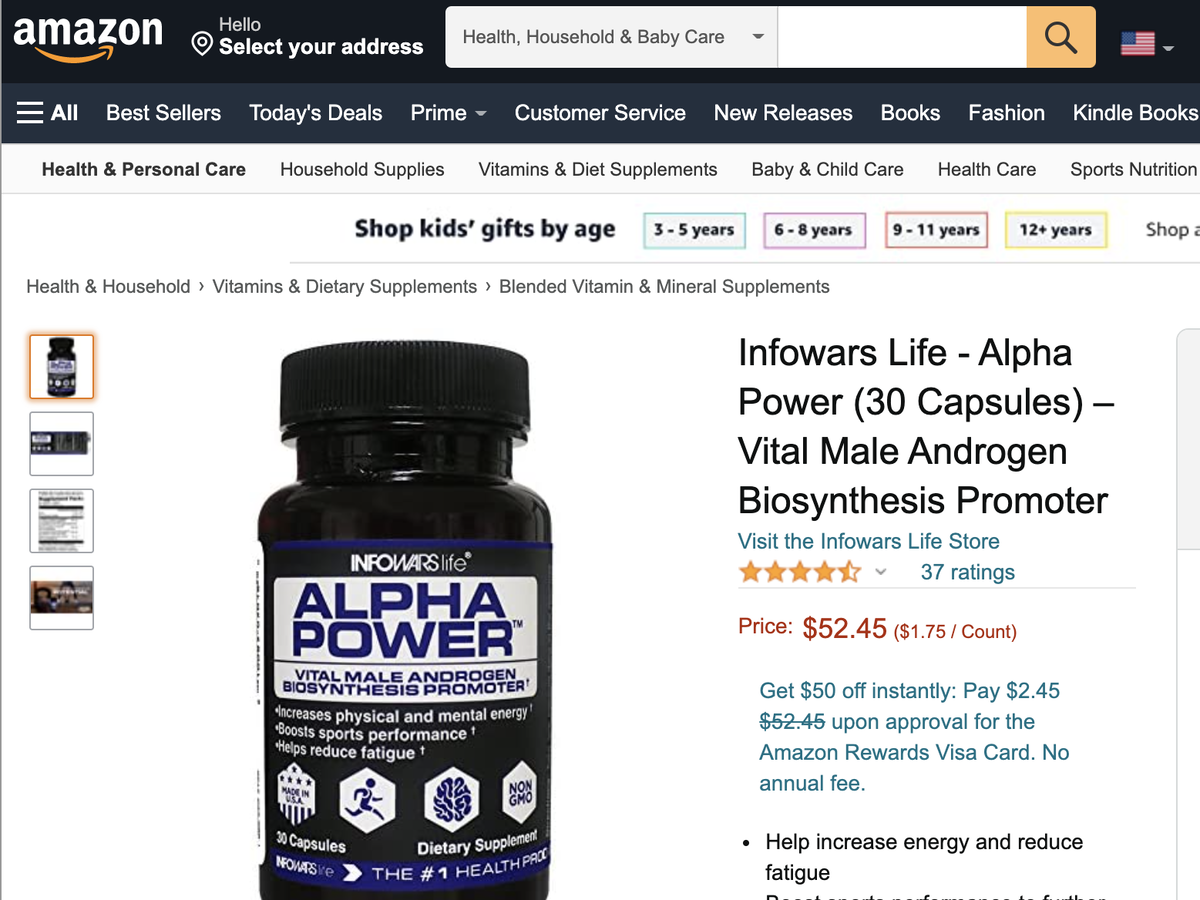 Through Amazon, Infowars sells a variety of dietary supplements such as “Alpha Power.” The supplement industry is largely unregulated, though Jones received scrutiny from government agencies in 2020 for claims he made about his supplements’ supposed ability to treat COVID-19.


The dietary supplement industry is largely unregulated in the United States. But Jones’ supplement business has gotten scrutiny from government agencies. Near the beginning of the coronavirus pandemic, Jones marketed colloidal silver products — such as a “Nano Silver toothpaste” and a “Superblue Silver Immune Gargle” — as treatments for COVID-19.

Leading medical authorities say colloidal silver is not safe or effective for treating any medical condition, let alone COVID-19. At high enough doses, colloidal silver can permanently turn a person’s skin blue. So the Food and Drug Administration sent Jones a warning letter, demanding that he stop making false and misleading claims about his products. The New York attorney general also sent Jones a cease-and-desist letter. The products cited by the FDA were sold on Amazon back then but no longer appear on the site.

It’s unclear why Jones has so far evaded scrutiny from Amazon.

In recent years, Amazon has blocked some products it deems hateful. After a white supremacist murdered nine Black churchgoers in Charleston, S.C., in 2015, Amazon removed listings for Confederate flags. This month, Amazon said it would no longer “sell books that frame LGBTQ+ identity as a mental illness.”

But the retailer has struggled to combat false and misleading claims by third-party sellers as well counterfeit products and other items found unsafe by regulators. A 2020 NPR investigation revealed that amid the coronavirus pandemic, more than 100 dietary supplements sold on Amazon made misleading and potentially illegal claims that they could treat viruses.

The SPLC’s Hayden said that Amazon has generally been reactive — rather than proactive — when dealing with problematic products and sellers, often waiting until public pressure builds.

Employers Are Struggling As Workplaces Divided Over Vaccine And Mask Policies : NPR

Nurse Rehabilitation Programs: Why Is Enrollment So Low?

In NYC, Proof Of Vaccination Becomes A Key To The City