Facebook Twitter LinkedIn Pinterest WhatsApp Telegram Share via Email Print
NEW DELHI: In the past week, India recorded the highest number of fresh Covid-19 cases since mid-December, registering a sharp 33% rise over the previous week. Deaths from the virus too rose by 28% to a six-week high of 876 during the week (March 8-15).

In percentage terms, this was the sharpest weekly surge of infections since July. In absolute numbers, nearly 1.56 lakh (1,55,912) Covid-19 cases were recorded in these seven days, the highest in 12 weeks since December 14-20. The weekly case count has doubled in the past four weeks since the second surge of the pandemic began in the country. 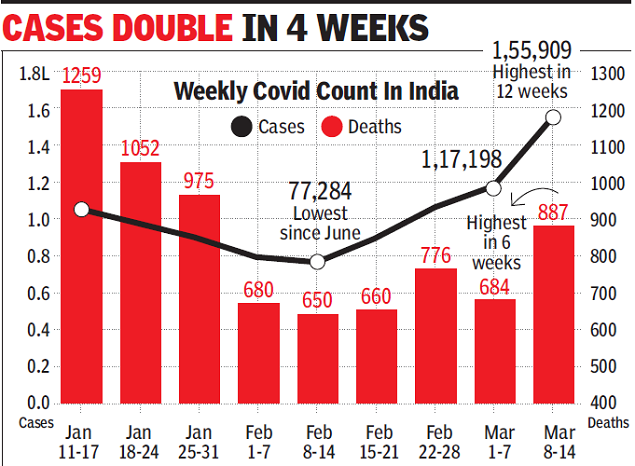 The spike in infections continued on Sunday with 26,386 fresh cases, the highest single-day total in 85 days since December 19.

Total Covid-19 cases reported during the March 8-15 week were 38,714 more than the previous week’s count, making it the highest weekly rise in cases since September 7-13. Weekly cases in the country had dipped to its lowest number since June 8-14 last year in the February 8-14 week, when a little over 77,000 cases were recorded. Since then, infections have been steadily rising.

Deaths related to the virus have also surged in the past week although the case fatality rate remains low. This week’s toll of 876 was the highest since 975 fatalities were reported in the January 25-31 week.

Meanwhile, India’s total Covid-19 count of 11,385,519 put it at third place in the world, having been overtaken by Brazil, which has been recording the highest daily number of cases for several weeks now. Maharashtra recorded another big spike in cases, with 16,620 new infections recorded in the state on Sunday. This was Maharashtra’s highest single-day tally since September 30.

There were 119 deaths reported from across the country in the past 24 hours.