Facebook Twitter LinkedIn Pinterest WhatsApp Telegram Share via Email Print
After the lungs, the liver and kidneys are the most affected in patients with severe Covid-19. This has been confirmed by a study conducted at AIIMS, which involved examining tissue samples taken from different organs of 37 patients who succumbed to the disease. The doctors found cardiac involvement was much lower than anticipated.

“Further research is on to understand how the virus affects different organs. It will help us strategise how to treat patients and also throw light on potential post-Covid complications,” a senior doctor who participated in the study told TOI.

Initially, it was thought that Covid-19 was essentially a respiratory infection that mainly affected the lungs, but it was later revealed that multiple organs were affected.

Dr Naveet Wig, the corresponding author of the study, told TOI that their analysis had reconfirmed that the lung was the most affected organ in severe Covid-19 cases. Asked about the damage seen in tissue samples of liver and kidneys, he added that some changes could have been caused by underlying diseases.
Examination of tissue samples revealed that 78% of the deceased patients had acute injury in the lungs, 37.5% had associated bronchopneumonia, pneumonia that causes inflammation in the tiny, balloon-shaped air sacs that help lungs exchange oxygen and carbon dioxide molecules to and from the bloodstream, and scattered micro-clots were visualised in 21% samples.

It was also revealed that 71% samples had increased activity of Kupfer cells, the first line of defence for the liver, 27.5% had evidence of liver cell death and 14% had features of acute chronic liver failure. The kidney samples showed nearly every second deceased patient had acute injury in the small tube-like structures of the organ that remove salt, excess fluid and waste products from blood. None of the patients showed microvascular thrombosis or clot formation in the kidneys.

All heart biopsies showed non-specific features, such as hypertrophy with nucleomegaly with no evidence of myocardial necrosis (death of cells responsible for generating contractile force in the intact heart).

A senior doctor at AIIMS said: “Many studies conducted abroad have shown clot formation in the organs as an important cause of death. However, in our study, clots weren’t seen in the tissue samples. This could also be because in our country anti-coagulants, a drug to prevent clot formation, are given to almost all patients with severe Covid-19 infection,” added the doctor. 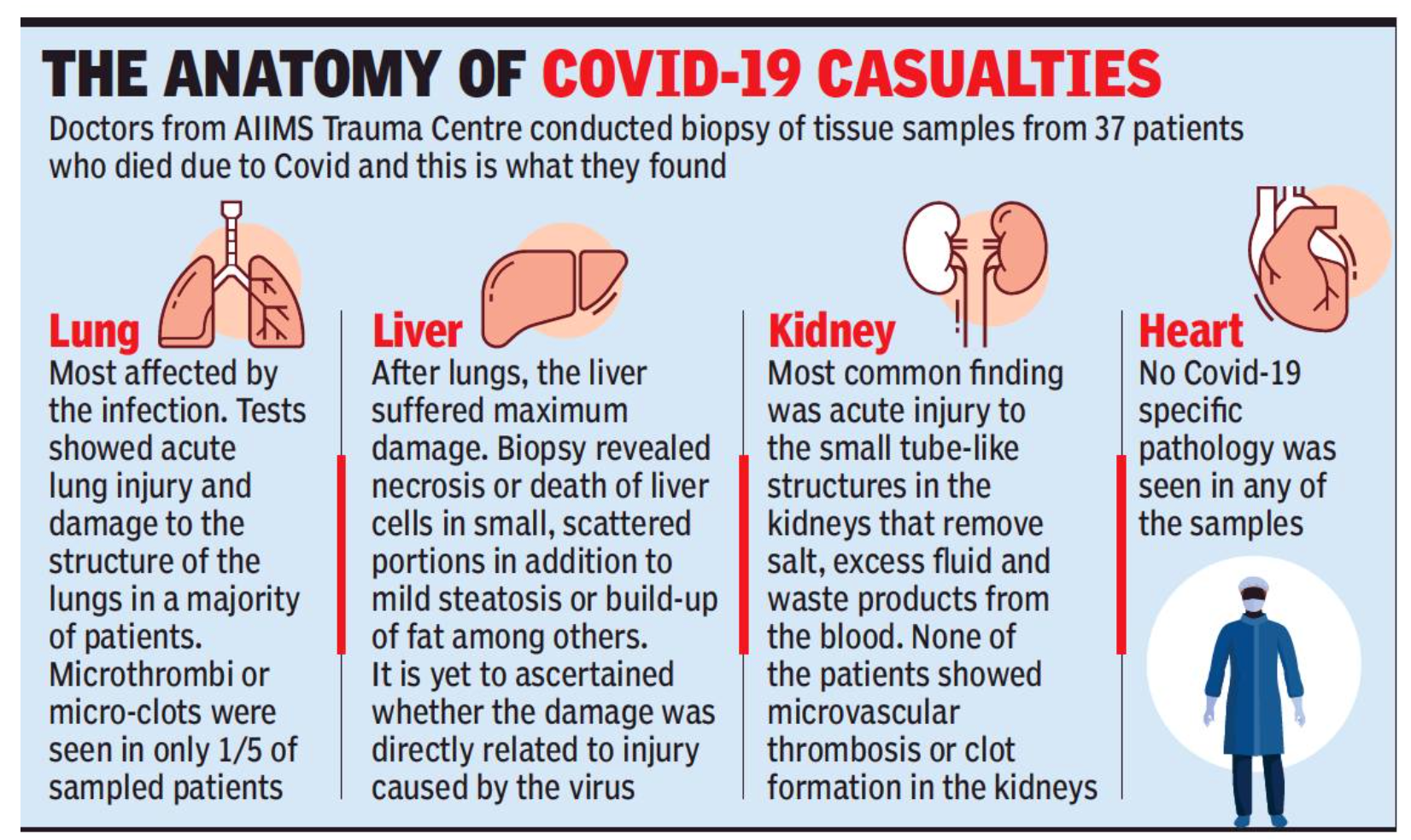 Aducanumab: What to Know if You Prescribe

Alabama's Vaccination Rate Is The Lowest In The U.S. And COVID-19 Infections Are Up